from €15.49
In stock
Only %1 left
Package Content
of your choice

The tamaVet® Multi 3TA Test allows the combined and reliable detection of antigens of rotavirus, the bacterium Clostridium perfringens and the parasite Cryptosporidium parvum in the faeces of cattle, sheep, goats, pigs and horses on site. 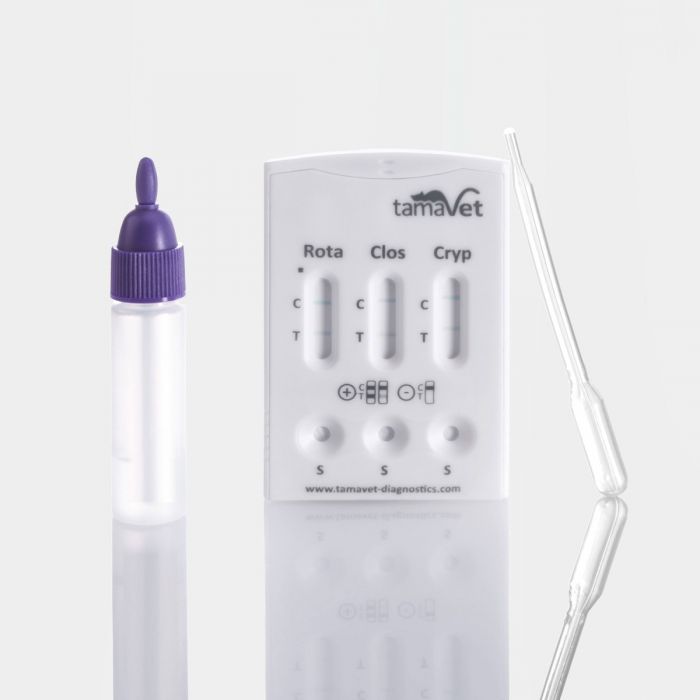 Rotaviruses are the most important pathogens that cause severe gastrointestinal diseases, especially in young animals of various species. The virus infects intestinal cells and, after a short incubation period (12 hours to approximately 3 days), leads to drastic electrolyte shifts and to the death of cells, caused in part by the enterotoxin NSP4. Disease caused by Clostridium perfringens is associated with increased proliferation in the intestine, with the formation of various toxins.

The protozoan Cryptosporidium parvum is an enteric parasite, the infection is normally transmitted orally. Diarrhoeal diseases, especially in young animals, are often caused by mixed infections with one or more of these pathogens. The largely similar symptoms they cause, such as apathy, loss of appetite, diarrhoea, dehydration and fever can lead to large losses in the herd as early as a few hours/days after birth.

The test is suitable for the early detection of suspected infection with rotaviruses, Clostridium perfringens and Cryptosporidium parvum, or in the case of clinical symptoms, in cattle, sheep, goats, pigs and horses. As the excretion of pathogens differs and can be intermittent, the test should be repeated if necessary.